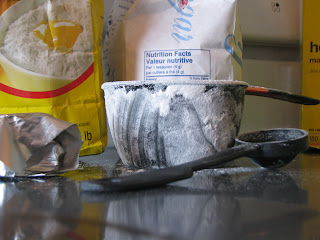 My kitchen is a mess, but my heart is organized. I've started eating more at home, and less out on the road. I'm cooking from scratch, not just boxes and cans. The freezer holds more leftovers than it does heat n eat meals.

Today, I baked bread. From Scratch. No bread machine, no stand mixer, heck, I don't even own a single wooden spoon. I measured. I mixed. I kneaded and punched and folded and voila! I had bread dough! I felt accomplished, satisfied, and oddly at peace with the fact that yes... I'm becoming a domestic goddess. So domestic I could moo.

Menu planning is a big step in cooking at home. If I don't know what I need to make a meal, I don't have any ideas. Nothing gets defrosted, nothing gets cooked. The kids eat chicken nuggets and the adults eat... soup. Or mac n cheese. Or plain ol' cold cereal.

That isn't how I want this family fed. I want whole grains. I want real ingredients, I want home cooked food, I want the apartment to smell like love is in the air ( for you know that the way to a heart is through ones stomach - from child to adult, food speaks ).

Today was a big step with baking piroshki - it was an all day affair, with mixing and cooking and simmering, oh my! I photo'd the whole process but I'm not sure what to do with them... No one really needs to see my cooking adventures ( despite the uber tastiness that occurred - even MILA ate two piroshki! ). Both the bread recipe and the filling are my dear friend Arie's recipe. She simply decided she was making piroshki and she did, even though she'd only had them once in her whole life. I strive for that! The fact that ( omg ) I BAKED BREAD from SCRATCH ( moooo ) was a major breakthrough. I made three babies. I made cloth diapers. I baked bread from flour, water, salt, etc.

My friends are such an inspiration here - many of them have food intolerances and allergies so severe that eating out is *not* an option. Ever. It is home cooked or hungry. And I assume that their houses still get clean, their children are clothed and bathed, and their husbands go to work with a smile on their face. They don't complain about food ruts, children who won't touch vegetables, and the never ending battle against dishes. They wear aprons. They bake foreign foods and ancient grains and all sorts of delicious concoctions. It amazes me that anyone has the energy, and most of these ladies have more than three children!

So it is my goal to cook more for my family. Wholesome, real food - not food from a can. 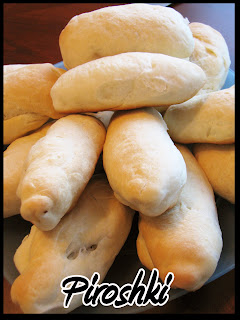 Congratulations on your wonderful accomplishment. Your piroshki made my mouth water - I haven't had these since I was much, (much!) younger. I bet your home smelled fantastic!